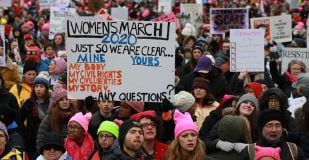 Young women are increasingly rising up against the white-patriarchal values that have guided national policy for centuries. Movements like the Women’s March and TimesUp have come to life in recent years, marking what many deem a new wave of feminism. Despite these strides, many young women feel alienated from feminism. They fear that feminist ideology is too aggressive, “man hating,” or too politically charged. While they do believe in equality between men and women, they tend to define their beliefs outside the lens of feminism, saying things like: “I’m not a feminist but I do believe in women’s rights,” or “I know women are still struggling towards equality, but the feminists just aren’t doing it the right way.”

This is not a new issue. In the 1960s, women were similarly divided by an “us and them” narrative. Acclaimed author Joan Didion publicly struggled to set herself apart from feminists, writing articles that described the subjugation of women, but failing to see the connection between feminism and her life. Didion had qualms with the “passion” of the feminist movement, something she described as “very New England.” Didion’s rejection of feminism irked her contemporaries, but her concerns are nonetheless pertinent to today’s discussion. Didion’s critique was a perceived lack of nuance among feminists, a fear of hard-lined extremism that is echoed now by critics and students alike. How does one convince Joan Didion that feminism is necessary and inclusive? You must focus on the issues and personal interpretation, something she and her modern-day counterparts can identify with and internalize.

A name may seem like a small thing, but it can have significant consequences for one’s advocacy, political engagement, and willingness to support causes. Thus, it remains important that women who are motivated by equality and celebrate women’s progress call themselves feminists. 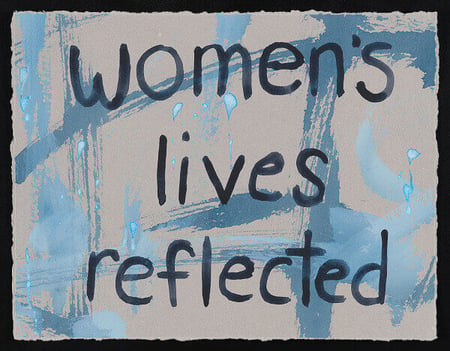 As an ideology that has existed for over a hundred years, feminism boasts a wide range of definitions. This is exemplified in the National Portrait Gallery’s exhibit “What is Feminist Art?” The exhibit includes letters collected in 1976 and 2019 from feminist artists across the country with each artist describing their particular view on feminism. Some women wrote in twice, both in 1976 and 2019, showing the change a lifetime can have on someone’s views. “Feminism is not a goal,” one woman wrote. “It is a means for achieving equality for all human beings; for giving women the freedom to become artists.” Feminism, as this exhibit reminds its audience, has range.

This range is an opportunity for the young women of today. It invites interpretation and encourages everyone to adopt the title that matches their ideology. At its core, feminism boils down to the belief that people of all genders deserve equal opportunity and treatment. Those who fear feminism often and wrongly equate it to the aggression they see on Twitter. Instead, they should recognize that anger as a particular response to a very real issue. They are welcome to have their own response to the problem; but in recognizing the issue at all, they are by definition feminists. The need for feminism is constant and ongoing: it is a means to an equitable end. To quote Taylor Swift in her 2019 documentary Miss Americana, “You’re a [feminist]? Sick, get in the car. We’re going to the mall.” Or, in simpler terms: we should all be feminists.

Photos courtesy of Axios and the Smithsonian Institution.