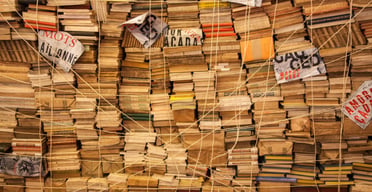 If you have encountered hoarding problems through television representation — think the A&E reality series Hoarders — you may believe you have a sense of what the disorder entails. As with most topics covered on reality television, however, hoarding disorder is far more complex than it seems.

The Connecticut Women’s Consortium is proud to offer trainings on hoarding disorder taught by David Tolin, PhD, ABPP, one of the country’s leading experts on the subject. In advance of his March 11th training, Buried in Treasures: The Nature & Treatment of Hoarding Disorder, we wanted to review a few myths about a disorder that more communities are beginning to recognize and address.

Myth: Hoarding disorder is just a label for people who are messy and don’t throw things out.

Fact: Hoarding disorder is a very real mental health condition that was added to the Diagnostic and Statistical Manual of Mental Disorders (DSM-5) in 2013. Although life-impacting clutter is a significant symptom required for a hoarding disorder diagnosis, hoarding disorder is more than simply living in a very cluttered space. People with hoarding disorder have intense difficulty giving or throwing away items, whether or not said items are objectively valuable. This difficulty stems from the value, usefulness, or sentiment the person attaches to each of their possessions. Hoarding disorder also often leads to excessive acquisition of unnecessary new items that the person then saves and struggles to discard.

Fact: For someone who has problems with hoarding, parting with the possessions they save is distressing because they do have meaning, value, or potential usefulness to the person keeping them. These possessions may be things that other people would easily discard, like an old newspaper or a gum wrapper, but to dismiss them as meaningless or useless fundamentally misunderstands the difficulty discarding these items poses to someone with hoarding disorder. Dr. Randy Frost, another leading expert on hoarding disorder who joined the Consortium this past fall for a series of trainings in partnership with the Department of Mental Health and Addiction Services, shared the following memory of a client’s bag full of bottle caps in a 2020 piece in the Monitor on Psychology:

When I look at a bottle cap, my brain thinks, Where can I find a wastebasket? But in her brain, there are all of these rich associations about the color, shape, texture and what an artist might have been able to do with the bottle caps, even though she wasn’t an artist herself. . . . In many ways, hoarding is an ability to appreciate physical characteristics that goes far beyond what the rest of us can do.

Myth: If someone has hoarding disorder, the best thing you can do to help them is to throw out all of their hoarded items, even if they don’t want you to do so.

Fact: Because hoarding disorder often entails the persistent acquisition and saving of items, simply throwing out all of the clutter someone has accumulated will not help them in the long-term. Perhaps even more importantly, the distress caused by discarding items that have meaning and value to the person with hoarding disorder is significant; discarding items without their permission, or without appropriate treatment and care to help them navigate the associated distress and become accustomed to the process of discarding, can have serious, harmful consequences. In an article in The Washington Post from 2016, one woman with hoarding disorder recounted the experience of her adult children clearing out her apartment as traumatizing: “All her treasures, gone. . . . so sterile, so empty . . . Almost immediately, she began reacquiring things—with a vengeance.”

If you are interested in learning more about hoarding disorder—such as the growing evidence regarding genetic factors, the age at which hoarding disorder symptoms can begin to appear, and its many comorbidities—we hope you’ll join the Consortium and Dr. Tolin on March 11th for Buried in Treasures: The Nature & Treatment of Hoarding Disorder.

Interested in learning more about Buried in Treasures: The Nature & Treatment of Hoarding Disorder?