The Weight of (My) Race: Black Women and Eating Disorders 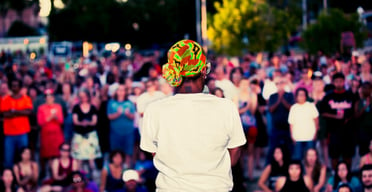 "Black Women Are Leading this Civil Rights Movement" by Johnny Silvercloud is licensed with CC BY-SA 2.0. To view a copy of this license, visit https://creativecommons.org/licenses/by-sa/2.0/

On October 1st, the Consortium will have the privilege of hosting Paula Edwards-Gayfield, MA, LPCS, LPC, NCC, CEDS, Regional Assistant Vice President of The Renfrew Center, for a two-hour training entitled “The Weight of (My) Race: Black Women and Eating Disorders.”

Edwards-Gayfield will discuss unique factors associated with this diverse group and address the stigma associated with eating disorders. She will also explore evidence-based interventions that will assist providers in creating the therapeutic “space” for people of color to share what they are experiencing.

In anticipation of this event, here is some additional information and resources related to the intersections of race and disordered eating, particularly among Black women:

According to the National Eating Disorders Association, “Black teenagers are 50% more likely than white teenagers to exhibit bulimic behavior, such as binging and purging (Goeree, Sovinsky, & Iorio, 2011).” Additionally, Black youth report similar rates of attempting to lose weight as their white peers and display similar rates of eating disorder symptoms. Despite this, studies have shown that doctors are far less likely to ask people of color about eating disorder symptoms, even when they have acknowledged eating and weight concerns.

In the study presented in the infographic above, not only did over 20% fewer clinicians identify problematic eating behavior in identical case studies when the woman’s race was listed as Black, but these clinicians were also less likely to recommend that the Black patient receive professional help. Additional studies have also illustrated that people of color are significantly less likely to receive help for issues related to disordered eating.

A number of Black women have spoken out in recent years regarding their experiences of disordered eating.

Anissa Gray, the author of the novel The Care and Feeding of Ravenously Hungry Girls, shared her experience of bulimia in a 2020 piece for Shondaland.com. She remarks that there was “this little voice in my head that said: Black girls don’t get eating disorders,” and recalls an instant during couples counseling where the therapist assumed the intake form that said “eating disorder” referred to her white wife, even though Gray herself presented at the appointment significantly underweight.

While New York Times bestselling author Roxane Gay’s 2017 memoir Hunger does not explicitly use the language of “eating disorder” to describe her experience, her book dives deeply into the ways in which trauma, disordered eating, and weight have impacted her life as a Black woman.

These women are far from the only ones writing on the topic of eating disorders and race. “Beyond ‘Eating Disorders Don’t Discriminate,’” a June 2020 blog post at The Emily Project, shares a list of some additional books and articles written by Black women on their lived experiences with eating disorders.