Getting Help for Hoarding Disorder 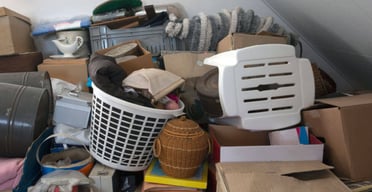 If you’ve watched the reality TV show Hoarders or tried to reorganize your space according to the ideas promoted by Marie Kondo, you’re familiar with our cultural fascination with stuff.

When people have hoarding disorder, they have trouble letting go of objects that other people might find useless. As the hoarding continues, they accumulate and store things until it becomes a problem, or even a health hazard.

David Tolin, PhD, ABPP, is one of the nation’s experts on this complicated condition. He’s helping dispel myths about hoarding disorder and sharing critical information with behavioral health professionals on how to help people with hoarding disorder.

In his Consortium training, Buried in Treasures: the Nature and Treatment of Hoarding Disorder, Tolin starts by explaining what hoarding disorder is—and what it isn’t.

What the DSM‑5 Says about Hoarding Disorder

The Diagnostic and Statistical Manual of Mental Disorders (DSM‑5) added hoarding disorder as a mental health condition in 2013. There are several criteria listed in the DSM‑5 for hoarding disorder. People with this disorder have

In other words, the possessions, and the attachments people form to them, cause serious problems in work, life, and families.

Hoarding looks like clutter. But it’s more than just a messy room, or piles of bills on a table. It happens when a person acquires and saves things at an unusual rate, and when they experience disorganization. It’s life‑impacting clutter.

Acquisition means the person with hoarding disorder is getting things. Sometimes they buy them, and sometimes they find free things online or on the street. Other people with this disorder steal or passively acquire things.

Some people hoard animals, too, causing health hazards for animals and humans. And hoarding is a growing problem among the elderly population. What makes this disorder so difficult is the attachments people form to the objects they acquire.

Even if it looks like junk to you, it has meaning to the person with hoarding disorder.

Although we don’t really know the cause of hoarding disorder, The Cleveland Clinic lists the following risk factors for hoarding:

A Washington Post article asserts that up to 19 million Americans have hoarding disorder. That’s 6% of the population. The increase in hoarding disorder has consequences for relationships, families, workplaces, and public health.

People with hoarding disorder lose jobs because of their behaviors. Many of them have severe health problems that are related to unsafe living conditions. Up to 1 in 55 people with the disorder have had a child removed from the home, and 13% have been evicted or threatened with eviction.

The burden for families is especially acute. Kids who grow up in hoarding homes have strained relationships with parents and are often too embarrassed to invite friends over.

Hoarding causes fires. A study done in Australia found that hoarding was responsible for nearly a quarter of preventable fire fatalities; 75% of those residences did not have working smoke alarms.

Hard to Give Up

It’s somewhat counterintuitive, but it’s often not helpful to clear out a hoarder’s space without treating the underlying issue.

Asking, or forcing, people with this disorder to get rid of their things often causes distress. Some people describe the process of having relatives clear their stuff as “traumatizing.” A Washington Post article describes a woman who filled her apartment with “treasures” until the only way to get around was through narrow paths. After her daughters tried to help by clearing it all out, she started accumulating again.

What are the causes of hoarding disorder, and why is it such a difficult problem to treat?

Hoarding disorder is caused by a combination of several behavioral mechanisms. Tolin calls them “Bad Guys.”

Before the DSM‑5 classified hoarding disorder as a mental health condition, it used to be considered a subtype of obsessive‑compulsive disorder (OCD). But the more we study it, the more it appears to be more closely related to anxiety and depression.

That is why treatment for hoarding disorder shares some similarities to treatments for anxiety and depression.

Cognitive‑behavioral therapy (CBT), individually or in groups, can help people get a handle on their behaviors. CBT can help people understand why they hoard and learn how to feel less anxiety when they get rid of things.

CBT for Hoarding Disorders, coauthored by Tolin, is a guide for therapists to conduct group sessions where they help people to discard objects, learn decision‑making and problem‑solving techniques, and explore motivational interviewing (MI) strategies. Participants take photos of their homes to show progress as they remove objects.

This form of treatment tends to work best with people who are not severe hoarders, who exhibit less social anxiety and perfectionism, who are women, and who complete their homework throughout treatment.

Two antidepressants—Venlafaxine (Effexor) and paroxetine (Paxil)—are sometimes prescribed for people with hoarding disorder. When taken in combination with CBT, some people find they are more able to manage their symptoms.

Because so many organizations, institutions, and communities are impacted by hoarding, another promising way to address hoarding disorder is to form multidisciplinary task forces. These are community efforts to connect people with the disorder to the help they need and to offer training and resources to families affected by hoarding.

Some of these task forces also run support groups for friends and families.

When behavioral health professionals work with clients, communities, and families to look at the underlying causes of hoarding disorder, treat anxiety and depression, and approach hoarding with compassion and patience, a less cluttered, better world is possible.