How to Talk about Suicide and Self‑ Harm with Adolescents 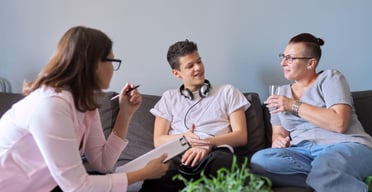 While the nation and world grapple with the difficult challenges of the COVID‑19 pandemic, another public health crisis continues to grow.

In 2019, our last so‑called normal year, suicide was the 10th leading cause of death, according to the National Institute of Mental Health; it killed more than 47,500 people.

What are the warning signs, and why do so many young people talk about wanting to end their own lives?

As behavioral health professionals, there are two major things we can do to help adolescents struggling with suicidality:

What we cannot do is ignore the problem. Suicidal thoughts and actions are serious, and when we notice the warning signs, we need to connect those exhibiting them to life‑saving resources—and stay connected.

Even before the ravages of the pandemic, our country appeared to be experiencing an epidemic of suicide. In the Consortium’s online course, Teen Suicide and Self‑Harm, Mara Gottlieb, Ph.D., LMSW, talks about the risks of suicide in adolescents. She also provides concrete strategies for talking about suicide and providing support for young people who are at risk for self‑harm.

Dr. Gottlieb shares that 130 suicides happen every day, which is one every 11 minutes. Between 1999 and 2019, the number of suicides rose 33%; keep in mind, these are pre‑pandemic statistics.

After unintentional injury, suicide is the second leading cause of death for people ages 10‑14 and 15-34. Men die by suicide more often than women, and white men make up the largest segment of deaths by suicide.

In 2021, the US Surgeon General issued an advisory report that sounded the alarm about this public health crisis. The report outlined some of the challenges facing children and youth since the pandemic. For example, by June 2021, more than 140,000 young people had experienced the death of a loved one to COVID‑19.

Rates of mental health issues are through the roof. Here are just a few statistics cited in that important advisory:

The difficulties young people are experiencing during the pandemic are even more challenging because of their developing brains. Research shows that the so‑called executive functions, like considering long‑term consequences and controlling impulses, are not fully developed until someone is in their early 20s.

The National Institute of Mental Health (NIMH) has some excellent resources for suicide prevention. They list the following warning signs that someone may be at immediate risk for attempting suicide.

Suicide does not have a single cause, but there are a number of risk factors, according to NIMH. Some of those factors include depression or other mental health issues, substance use disorders, chronic pain, a history of suicide attempts, family history of suicide or exposure to others’ suicidal behavior, physical or sexual abuse, the presence of guns or firearms in the home, and having been incarcerated.

Any type of stress can also increase the likelihood that someone will act on suicidal thoughts. That’s why it’s so important to recognize warning signs and get help.

The Language of Suicide

It’s helpful to become familiar with suicide‑related terms to be able to provide effective help for young people who are at risk. Dr. Gottlieb’s course provides the following primer:

Suicidal ideation, gestures, plans, or attempts are all important to address immediately. Because there is already so much stigma surrounding suicide, behavioral health professionals need to learn to talk about it in ways that promote health and do not increase stigma.

Saying someone “died by suicide” is kinder and more accurate than “committed suicide,” which sounds like a crime.

The single most important thing we can do for young people who are considering suicide is to talk about it. For too long, people seemed to worry that talking about suicide would encourage suicidal thoughts.

But we need to get suicide out in the open before we can stop it.

Behavioral health professionals who encounter young people in this type of emotional pain need to ask, “Are you thinking about killing yourself?”

The NIMH publishes 5 Action Steps for Helping Someone in Emotional Pain. 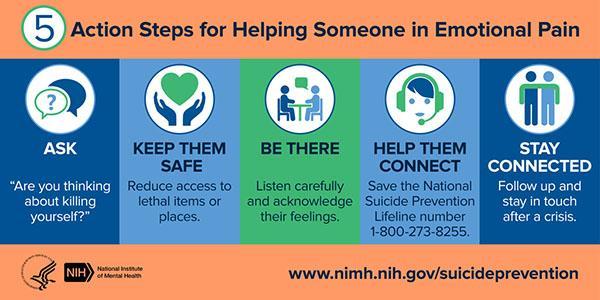 Researchers found that screening everyone in emergency rooms for suicide risk saves lives. There are also people working on preventing suicide in veterans by looking at electronic health data.

Caregivers and behavioral health professionals can help young people with safety planning to remove their access to weapons or substances they can use to attempt suicide.

Cognitive behavioral therapy (CBT) and dialectical behavior therapy (DBT) are two therapeutic approaches that have been shown to help people who have made a suicide attempt. Sometimes people are prescribed medications such as clozapine to reduce suicidal behavior.

And for everyone—caregivers or behavioral health professionals—staying in touch after someone talks to you about suicide is critical. Simply put, the risk of suicide goes down when people follow up.

Someone Is Ready to Talk

Someone is ready to talk or text about suicide 24 hours a day every single day.

Anyone who is worried about the risk of suicide for themselves or a loved one should program the National Suicide Prevention Lifeline (Lifeline) at 1‑800‑273‑TALK (8255) into their phones.

We look forward to creating a world where fewer young people find themselves in such unbearable pain that they want to leave it. Until then, we can do everything in our power to notice them, hear them, and help them.